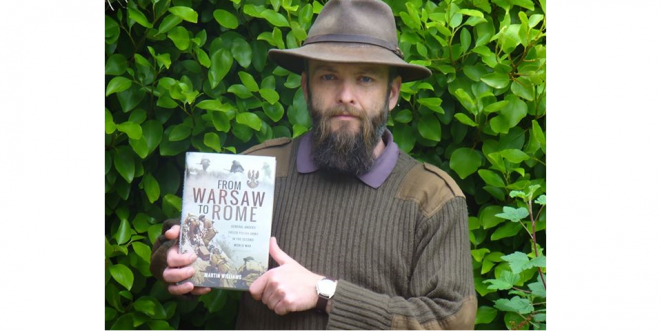 Interview with Martin Williams, the author of the book “From Warsaw to Rome: General Anders’’ Exiled Polish Army in the Second World War”, conducted by Marta Witczak-Żydowo.

1. How did your fascination with Polish history begin, especially with the history of the Polish II Corps?

My interest in Polish history was sparked by chance from growing in Plymouth where a main thoroughfare and fountain bear the name Gdynia, the Polish name obviously stood out and out of curiosity as a child I found out that Plymouth was the principal base of the Polish Navy in Exile during WW2. And for a long while that was the limit of my awareness of Polish history, but the seed had been sown.  It would re-awaken years later from my interest in militaria, as included with the acquisition of a Polish Army Active Service Medal for WW2 there was also a small silver badge in the shape of a shield with a cross and a mermaid reading Polski 2 Korpus. I had no idea what I was looking at, other than that the cross looked like the insignia of the British 8th Army. I had to find out what it was and what it represented, from that moment I was hooked.

2. You are not a historian by profession. Has history always been your passion, or did the history of Polish soldiers influence your interests?

History has always been a passion of mine, driven by curiosity to discover what I have yet to learn. I investigate everything that stands out as different to me, I enjoy challenging societies preconceptions of the past and accept no narrtive as definitive. There is always more to be discovered.

With specific reference to the history of Poland in WW2, I was shocked as to how little I knew and how vast a topic it is to investigate. I had know idea of the magnitude of the challenge I was about to undertake!

3. While collecting materials for the book, did you go to the places visited by General Anders’ army on the route from Warsaw to Rome, for example to the Montecassino Abbey?

This was something I was sadly unable to do due to working at away at sea. Visiting Italy and the sites of Monte Cassino, Ancona, Bologna and other Adriatic battle grounds is definitely on my list of things to do in the future.

4. In your opinion, could the history of the Polish II Corps become an inspiration for commercial series? Or maybe their story would make a fantastic movie?

This is undoubtly so, the characters, the scale, the locations, actions, pace, plot twists – it would be an epic spanning from geo-politics to basic survival.  It could make a very inspiring as well as moving production that could have wide appeal. As to how an international audience would react to being presented with so many Polish surnames would need some consideration, on that front Sikorski and Anders have a clear advantage on being accessable.

5. Can a British reader, or a reader of any nationality other than Polish, feel connected with the history of General Anders’ army, understand and identify with the fate of soldiers from your book?

This is the biggest challenge in writing such a book. The Polish experiences of WW2 are on a completely different level of suffering to what certainly any English speaking country can relate to, and that great difference can make Polish history appear alien, daunting and even abstract. I felt the way to move forwards was to bring to the fore the sizeable role of Britain, that the history of the Polish 2 Corps is not a uniquely Polish history subject, it is a joint Anglo-Polish story from begining to end in which the role of British decision makers was pivotal.

To engage an English speaking reader in the story of the Polish 2nd Corps is a challenge, it can only really be presented as relatable by the inclusion of the stories of Britsih personnel who were there and their reactions to events, hearing the story from of the British involvement from a Brisith perspective affords a window through which one new to such events can pull them into a tangible focus and begin to make sense of such huge and dramatic events. Once the picture becomes clearer the reader’s curiosity for what to them is new knowledge, compells them to read on.

As to understanding and identifying to the soldiers’ fate, foreign readers will be stunned into almost disbelief and amazed at what happened and that it was the result of western powers as well as the Soviets. It is a truth they would rather not be faced with as it runs contrary to the national narratives of the west, yet it is by no means a history that anyone should feel they have to distance themselves from. As the reader prgoresses into the subject they should take pride in the almost boundless courage, dedication and fighting resolve of the Polish Soldiers and likewise of the great lengths and personal endaevours of British military and Governemnt officals into securing the release of at least some of the Polish peoples held prisoner in Stalin’s USSR and in realizing General Anders’ drive to reenter the war and deliver unto the German Army the most powerful blow that Polish arms could muster.

6. The Battle of Monte Casino, which is the most important point on the route from Warsaw to Rome, was a demonstration of the Polish cause. Do you think that the current presentation of Poland on the international stage is objective and factual?

There is a divide, the presentation of the Polish military especially with regards to NATO participation and commemorative events are awarded acclaim and respect, for most other walks of Polish life there is in the media, a pervading undercurrent that the sate and society is immature with international news adopting an aloof and cursory reference to events in Poland. Probably the exception to this was the reporting about the Polish restaurant worker who faught and disabled a terrorist on London Bridge using a Narwahl tusk, a genuinely sensational and positive news story.

Perceptions amongst wider society are moving forwards faster as we are seeing more and more high-end elecrical goods stamped made in Poland, the Polish clothing retailer Reserved has branches all over the UK and on in the international stage several European rock bands play instruments handmade in Poland, so culturaly more and more Polish goods and names are becoming desirable.  The press lags several decades behind.

7. On your Facebook profile, my attention was drawn to collected Polish medals and military decorations from the Second World War. How big is your collection and how do you search for exhibits?

This was how my interest began in Polish military history and the 2nd Corps. The collection encompasses Second Republic awards and decroations and the almost complete order of battle for Monte Cassino.  Searching for exhibits is a lengthy a challenging process as many reside in the hands of people who have no idea what they are. It therefore takes a huge amount of time to search through every stock item to pick out Polish insignia, for instance a well-known collector once advertised for sale a ‘sunflower No.1 badge’ – it was in fact the collar insignia of the 1st Carpathian Rifle Brigade. Such ignorance is widespread and dispelling it was a major motivator for me writing „From Warsaw To Rome”. In searching for exhibits patience yields rewards, these items are all out there to be rediscovered and made available again to those interested in them.

From my collection I find the Cross of Valour awards from the Polish-Soviet War fascinating, in that they are numbered to the recipient but the records are largely destroyed – they present a mystery, the only remaining physical link to that soldiers’ endeavours, and where this mystery there is a story. This contrasts starkly to British awards where the complete records remain. What I was to discover is that whereas documenting British military formations is predominantly a research activity, Polish history has to investigated like a detective. And there are a lot of false leads and ellusive details.

8. What are you working on now? Will the next publications be related to the Polish history?

I have completed the manuscipt for the sequel to From Warsaw To Rome entitled ‘One Year To Bologna’ charting the 2nd Corps’ Adriatic advance to the conclusion of hostilities in Italy and the postwar disbandment of the formation. Hopefully a publisher will take it on, as my UK publisher feels it woud be to niche for them to produce.

I am also considering an illustrated book focusing on the insignia, medals and awards of the Polish 2nd Corps, not solely the Polish items but also including those issued to the Polish soldiers from Britain, Italy and America – it is the international scope and significance of Polish history that I particularly like to make better known.

Martin Williams – was born in Plymouth and educated at the University of Gloucestershire graduating in Landscape Architecture. He has spent the last fifteen years at sea as a Deck Officer in the Merchant Navy where he lived and worked with a great variety of characters from around the world. The tales from the Polish crews inspired him to find out more concerning past relations between Britain and Poland. Upon uncovering aspects of the Polish II Corps he began to explore their history in depth, and this book is the culmination of nine years work.